So as I mentioned in an earlier post I have the honor of being in possession of some North Korean Tourism/Propaganda pamphlets.  I just got the first batch of them translated and if you have ever been curious what gets said in something like that here you are!  Side Note:  I’m not completely sure the pictures posted coincide with the translated pages properly as this whole endeavor was not well organized.  However in Part 2 I will just link all the pages to look at.  If you want the pages now email me(sandzombie33@gmail.com) or PM me on the Facebook Page. 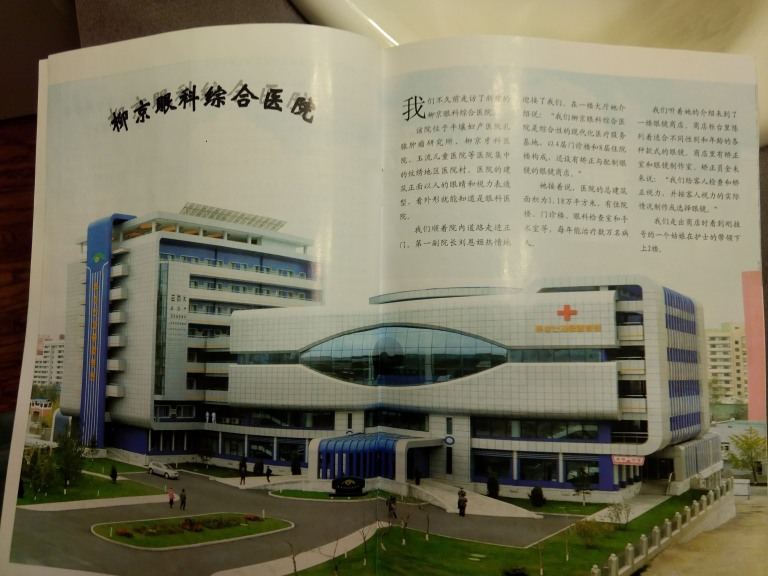 Since ancient times, women exist for families and descendants. “They devote their lives for their children without complaining”, this sentence reflects the traditional value of women.

Our dearest and highest-ranking leader, Mr. Kim Jong-un, believes in women, admire women, and show great concern for them. Now let’s introduce some of the stories.

On this day, Mr. Kim Jong-un looked over the institute from 1st floor to 4th floor for a very long time, he specific knowledged about the construction, and gave advices or comments carefully.

He said that giving a good name to a designed building can’t solve everything, the most important thing is to recruit excellent doctors, who have great clinical experiences of Mastopathy and Breast Cancer, to recruit researchers, and to install highly sophisticated equipment.

From then on, in early November, which is after a couple months, he came to the institute again. When he entered the central hall, he said with smiling, “It looks like a palace！”

This day, he said that he decided to build the Breast Oncology Institute for women, so he wants everything in the institute to catch up with the world-class level. He said that he will do everything for women in North Korea unconditionally.

He also said, “All highly sophisticated equipment are available in the Breast Oncology Institute all the time. Therefore, regular appointment system should be create, Mastopathy and Breast Cancer should be assessed or treated as soon as possible. I will do everything for women of North Korea unconditionally.”

Under Mr. Kim Jong-un’s generous concern, North Korean women all can receive treatment and assessment anytime, no matter what status, occupations, or class they are. 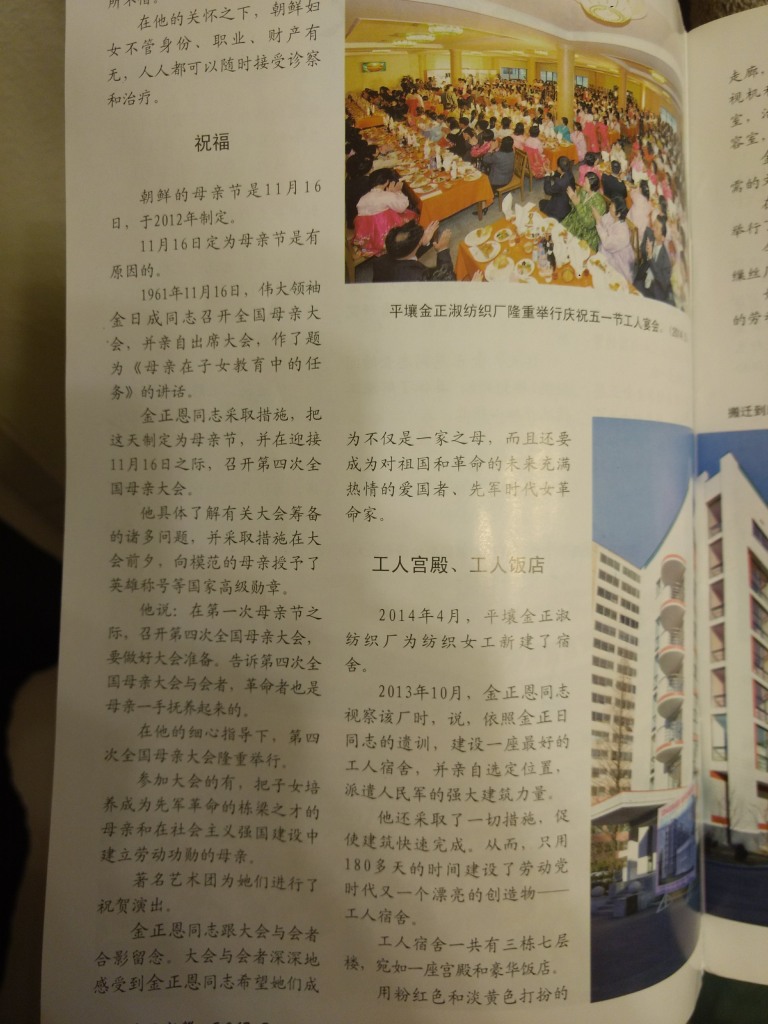 November 16th is Mother’s Day of North Korea, which is enacted in 2012.

There are reasons behind the festival which celebrate on November 16th.

On November 16th, 1961, Mr. Kim Jong-un, the greatest leader, hosted the national mother conference, created the topic of The Mission of Mother—Education Toward Children.

He got familiar with many questions about hosting the conference and awarded exemplary mothers heroic National Senior Medal.

He said: Be ready for the 4rth conference during the first Mother’s Day. Tell audiences of the 4th conference that revolutionists are raised by their own mothers too.

Those who attended the conference included mothers that raised their children as revolutionary eminent personages, and mothers that contributed labor service under communism.

The famous art troupe performed to congrate those mothers.

Mr. Kim Jong-un took pictures with people who attended the conference. All participants of the conference felt deeply about Mr. Kim Jong-un’s hope: He hope those mothers not only become the mothers of their families, but also become patriots who devote to their country, plus become revolutionary, with bright future and passion.

In October 2013, Mr. Kim Jong-un inspected the factory, and said that he would follow Kim Jong Il’s teachings of the deceased, build the best workers’ apartment, choose location by himself, and send the powerful strength from the militias.

He also speeded the building process quickly under every measure. As a result, It only took about 180 days to build a beautiful creatures during Labor Party era—-the workers’ apartment.

The workers’ apartment has 3 buildings, and 7 floors total, it looks like a palace and a royal restaurant.

Under his concern, people celebrated May 1st Labor Day by hosting a feast. 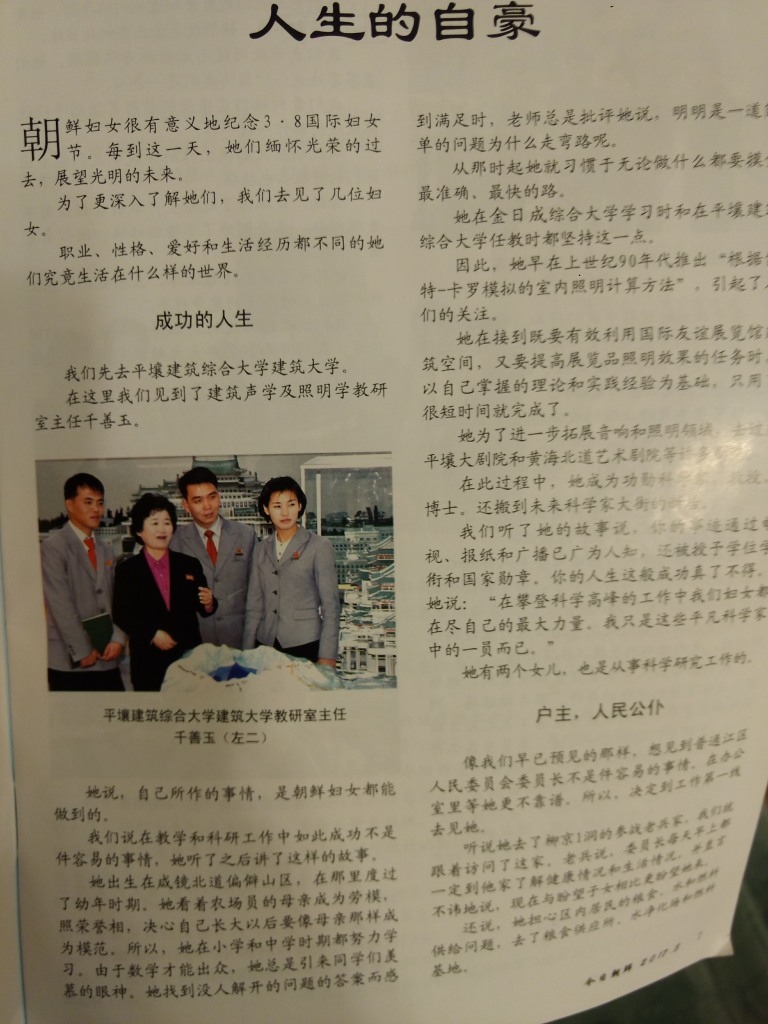 On this day, Mr. Kim Jong-un inspected the two leaders ‘s education room, the military camp, cafeteria, and salt field. He got familiar with veterans’ military missions, watched veterans’ art performances, and chatted with the female soldiers all day long.

It was getting late, but Mr. Kim Jong-un didn’t mean to leave, because the female soldiers didn’t want to leave him.

Mr. Kim Jong-un took pictures with female soldiers one by one. This occasion is a scene which shows the highest commander is with the soldiers as a family.