Part 2 to the series that was started here!  Turns out this is a lot of extra work so there will also be a part 3 and if you want pictures of the full, untranslated brochures let me know on the Facebook page or email me(sandzombie33@gmail.com).  Also like last time I’m not sure if these pictures coincide properly but oh well.  I will say this group has some of my favorites though.  Without further ado, here is an interesting North Korean article on sports and the meaning of life… 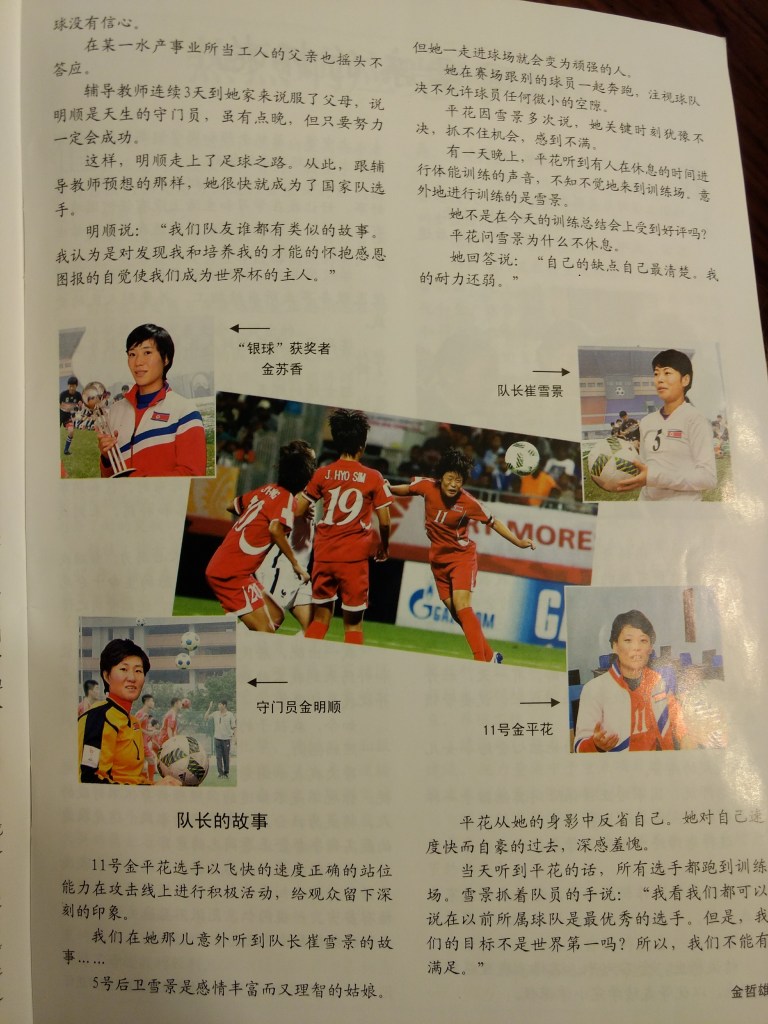 The talent is there for all to see but the forces behind DPR Korea’s success in women’s football is hidden from view. The phenomenon of DPR Korea’s women footballers is a strange paradox. In dominating Asia and the world at various age groups, DPR Korea have paraded three generations of unconcealed talent. However, an aspect that not even the secretive DPR Koreans can hide is that the country has produced some of the most talented female players on earth, at all levels of development. The senior team started the trophy chase in June when they won the AFC Women’s Asian Cup in Vietnam. The country’s success, however, was not restricted to Asia with the juniors winning the FIFA Under Women’s World Cup in New Zealand in November. Earlier this month, the DPR Korean under women reached the final of the FIFA Under Women’s World Cup in Chile, narrowly failing to repeat their triumph of two years ago after losing to the United States. If you ask a Korean the reasons for their success, almost always it is down to the inspired leadership of Kim, who apparently keeps close tabs on the country’s football teams. Jang Su-myong, who represented the Korea Football Federation Women’s Awards night, was flowing in his praise for the country’s leader.

It must be hard when you have your hand on the nuclear trigger to keep track of everything. Today it was claimed North Korean dictator Kim Jong-un fathered a baby girl in with an unknown woman, two years before his wife gave birth to the couple’s first child. Kim, married Ri Sol-ju but she only began to emerge alongside the young North Korean leader in July Former singer Ri Sol-ju – in her twenties, is believed to have given birth to her child,also a girl,late last year. When the former basketball star Dennis Rodman made a controversial visit to the North Korean capital Pyongyang in February, he said Jong-un’s wife talked mostly about her “beautiful baby daughter.” Analysts say the fact that there have been no official reports about either of Jong-un’s daughters is probably due to the ongoing three-year official period of mourning for Kim’s father, Kim Jong-il, who died in December, But a South Korean newspaper reported that, with the birth of the two little girls, there were imports of high-end Swiss and German baby products into North Korea. The newspaper also quoted a Chinese diplomatic source confirming that the current North Korean leader had fathered another child.

Meaning of your life

North Koreans have been taught from an early age to express devotion to both Kim Il-sung, the so-called Great Leader who died, and the Dear Leader, Kim Jong-il. Two journalists who visited the country Sue Lloyd Roberts and Michael Bristow, had a first-hand glimpse of life inside North Korea. Here are some of their observations.At the university’s foreign language department I asked the students how they had managed to learn such good English. Little girls smiling widely and dancing in perfect formation, little boys in smart red suits and painted faces singing praises to the country’s Great Leader. It started off faintly charming. But with mask-like faces and rigid grins, even children become rather sinister. More children are employed to sweep the steps leading up to the bronze statue of the Great Leader, which dominates Pyongyang.

Well that was certainly an interesting insight into North Korean life.  My favorite was the casual nuke mention while struggling to be a good father.  Anyway, Part 3 soon…