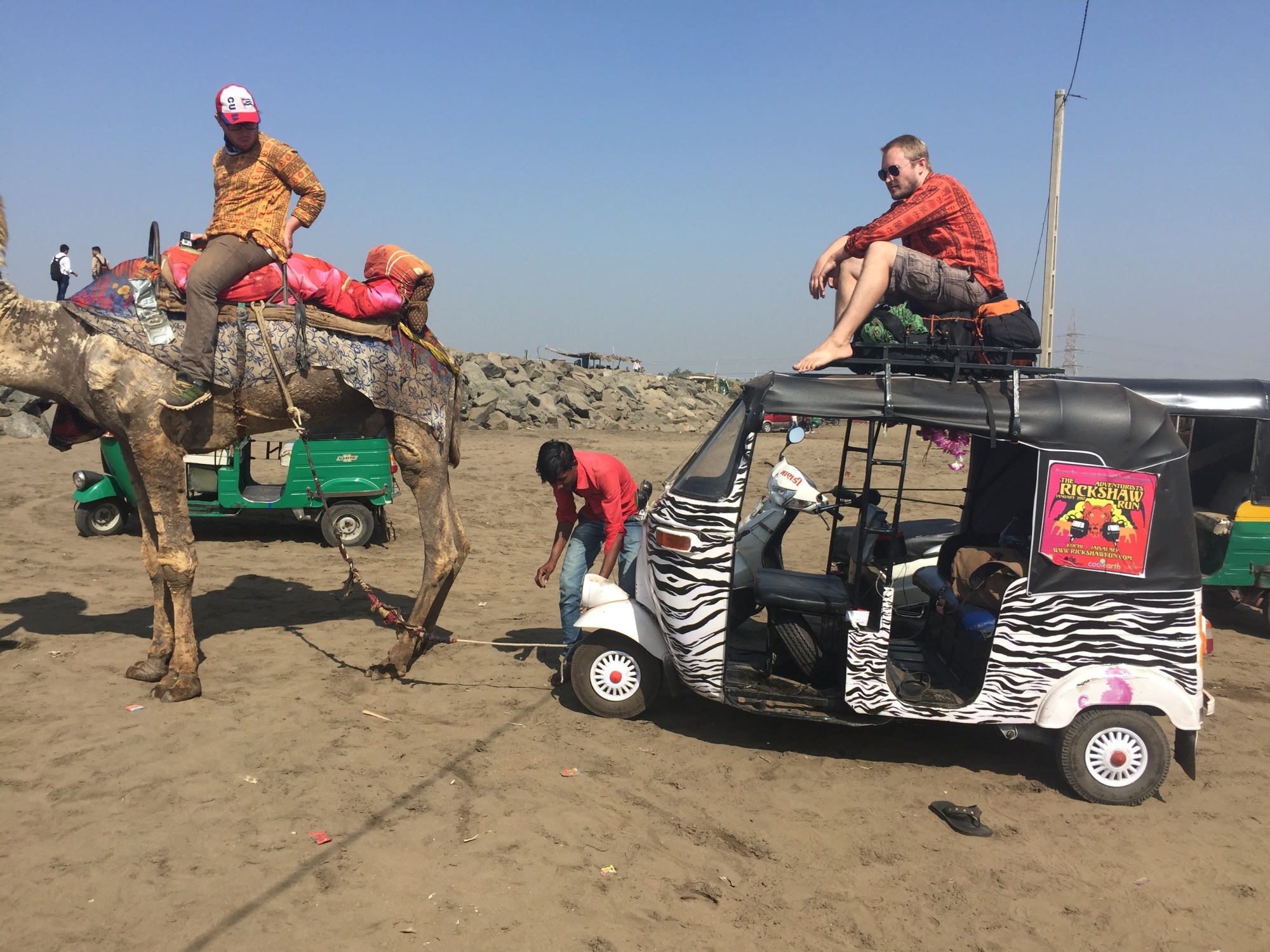 When we last left we had just had our engine checked out and basically transformed into a road demon that peaks at about 45 km/hr.

The next major stop was Mumbai, however I don’t have any sort of great story there other than we were stopped by another cop looking for a bribe and we drove our rickshaw through the McDonald’s drive through.  Sometimes you just need a burger, don’t judge.

Later on we were getting pretty close to Surat but we didn’t feel like detouring all the way into the city so we picked a different spot…Dumas Beach.  Yes, we picked that based entirely on the name.  When we were there they let us use the camels to pull around our Rickshaw which was a small comfort from learning we were now in a dry state and all the beer was alcohol free…

It was a lovely beach though, if not mostly empty, and also apparently one of the most haunted locations in India.  Oh right, we also paid them to let us use their camels to drag our Rickshaw around…

We did it all for the Camel Tow joke…

At some point north of Surat we also got stuck in a traffic jam that was apparently caused by two bulls fighting in the road.  Beat that excuse, USA.

There was also a corrupt cop and I tried to pet some monkeys but my teammates said that was a terrible idea.

Along the way in this dry state we stopped at a hotel and asked emphatically(begged) where we could get a real beer.  Dhruv, and his amazing ability to actually communicate, managed to learn about a seedy, completely illegal bar in the area.  In a desperate attempt to stave of questions about our alcoholism we managed to convince them to show us where this place was.

The concierge took us to a specific rickshaw driver who he had to pretty thoroughly convince to drive us to this location because, I assume, we didn’t look like the proper clientele.

After a ten minute rickshaw ride we got to a place that was hidden behind a series of tarps.  I mean really it couldn’t look more suspicious if it tried.  When walking in Dhruv was backed into by a drunk driver whose response to the whole thing was “Heyyy it’s a bar what do you expect?” before then continuing to back up.  So clearly we were in a bit of a wild west situation.

This bar was pretty much the definition of sketchy/dive but not in the cozy hipster way.  We were getting sidelong glances but also people weren’t straight rude because we were clearly just foreigners who need strong drink.  One thing I would like to note is there were no women in this bar.  I assume it’s cultural, I’ll refrain from comments on it.

The evening progressed as normal.  People took secret photos of us and drunk people wanted to be our friends.  We were the prettiest girls at the ball.  At the end of the night I had to go make tinkle and, as Eric and Dhruv told me, there was a brawl between the staff and patrons that involved makeshift blunt objects.  This makes me sad because all I had was a terrible smelling toilet.

One of the best parts of the evening actually came the next day.  We had apparently lost our rickshaw keys somewhere between the hotel and the illegal bar and had no hope of finding them.  However, nearby there was a lovely mechanic that taught us how to hotwire our vehicle.  So now every day from here on out we got to feel super cool and “Gone In 60 Seconds” the rickshaw to get it going.

Overall, this was one of those type B experiences where you enjoy talking about it more after it happens, and I really do.  Part 5 coming soon where we go through the legal hoops of getting alcohol in a dry state and the time I pissed of real royalty!