I need to start by saying I wasn’t sure if I should even tell this story. It could be considered offensive to some for a variety of reasons. Then I decided I would be doing a disservice to everyone, myself included, by not.

So in Chengdu there’s 4 Panda bases and we made a plan to visit 2 of them to snap a few pictures, no big deal. Any of you following us on Instagram just be prepared for Panda pictures for awhile. Anyway, the two we chose were the Panda Research base close to the city center in Chengdu, which will get its own post later, and this one, Dujiangyan Panda Base.

After some brief research I learned that one is allowed to take photos with a real life panda at Dujiangyan as well. When hearing this I had mixed emotions. First of all, people can have strong opinions about zoos and animals in captivity and I understand it. Personally, I think zoos as a concept are fine and the good ones put a lot of effort in conservation. Additionally, there’s a fair amount of animals that I don’t believe will survive in the wild as is and pandas are one of those. This is due to habitat destruction and a variety of reasons that I am not well versed in to really discuss but either way I think the idea of panda conservatories are good. The implementation of those go on a case by case basis but these 2 conservatories seemed to be on the better side based on casual research.  I honestly can’t attest to what pandas need for an environment, maybe more space would be better on the enclosures but this specific base deals more with panda rescues than breeding so…I’ll just move on…

The 2nd touchy part of this is animal tourism in general also causes a moral conundrum. You don’t ride elephants in Thailand, you don’t pet the dolphins in Mexico, don’t go to the circus, Asian countries have a history of mistreating animals for tourism photos. All of these stories ring in my mind while I consider hugging this panda. Is this animal exploitation? My best conclusion is…kind of? Maybe? But also not really? The animal is not doped up like the extreme examples which is why your photo window is very brief. The trainers in this facility are very aware of the panda’s mood and needs and it doesn’t seem forced in any way. Basically the panda is sitting on a bench getting fed and you get to sit next to it.

It isn’t forced into any pose and they are very strict on the rules. Am I blinded by my desire to be close to one of these animals? Possibly. I searched for definitive confirmation that what I was doing was clearly wrong and any reason to justify skipping it and really couldn’t find anything other that the general posturing that using animals is wrong, which I don’t necessarily disagree with, but those are muddy waters.

Regardless, I found no reason I couldn’t do it with a (relatively) clean conscience.

Now the 3rd dilemma in this plan. In order to take pictures with the panda you needed a doctor’s note. Now I had recently been to the doctor and gotten a clean bill of health but I didn’t think I would be doing panda related activities that required a note and it was the weekend and I had less that 12 hours. So I did what I feel anyone would do that I learned from grade school. I faked it. I googled an official looking document and submitted it hoping either the English was too complex or they just casually glanced. The document I used though was a bit ridiculous though…

I used a note certifying that Santa had checked all his reindeer for any type of “Gingerbreaditis.”  Now I know what you’re thinking, why not use a simple, easy to believe document?  Even the lady at my hotel helping me said this was a bit too much.  I couldn’t help myself though, I wanted to go big.  I figured worst case scenario I’m back to my original plan of just walking through the park, might as well go for the good story…

Well as you can guess, this was accepted and I was on my way down panda hug street, baby!  We woke up early, took the ridiculous list of public transportation(but surprisingly easy) to get out there, check in, and I’m sitting in my panda jumpsuit waiting for the magic.  The attendants all spoke decent English too which makes me question the channels my document went through or if my hotel took the liberty of “fixing up” my document.  They also sold panda wine, which if you followed my previous posts, is something I loved dearly.  It’s a low alcohol content, mead-like liquor that I had a bottle and a half of before getting to the panda.  My moral hangups were really just melting away in all honesty.

The panda photo itself was quick, you get about 20 seconds or less to sit next to it while it eats.  You can rub it’s head or paw if you are gentle but that’s all and I think those are reasonable rules.  Here’s a video of my encounter.

The panda hug costs 1800 RMB per person which can seem like a lot especially factoring in transportation.  If that’s a hangup then I’d say don’t do it.  Just walking through the park and watching the animals is quite nice.

The park path is lovely

There’s also volunteer options where you clean the panda cages and feed them in addition to the photo and it takes most of the day.  I didn’t look into this even though I looked really good in the jumpsuit. 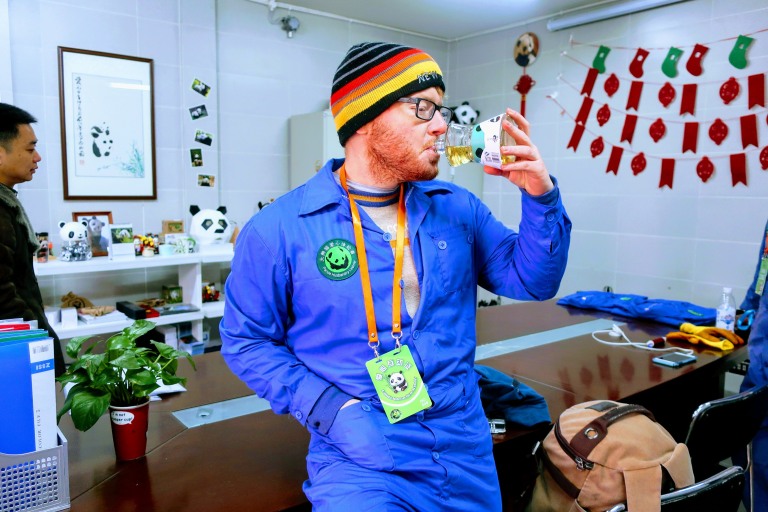 This whole experience was a solid thought exercise for me.  My mental hangups were very big no matter how much I downplay them here.  I do still even have some small mixed feelings about it to this day.  Panda tourism is a thing and depending on the case those animals are exploited.  However I do hope that based on where I did it that I didn’t contribute to the negative aspects of the industry.  Feel free to let me know if I’m in the wrong on my thoughts here, I get it.

I have more photos of this place, just follow us on Instagram or check out the Shutterstock Gallery on the main page.