Well only a few months late…but you know, I don’t have a good excuse…

Anyway, to ring in 2019 we were originally planning to be in London as it was a cheaper option flight wise but once we got there we weren’t feeling it.  We ended up looking up some of the better spots in the U.K. for the New Year and settled on St. Ives near the Southwestern tip on the island.  We wanted something a bit more scenic while also having a decent crowd for people watching and this one was on a coastal vacation town where everyone dresses in costumes so…that ticked both boxes.

Due to the last minute nature of our plan St. Ives itself was completely booked but we did get a lovely and affordable reservation at a BnB in Hayle, a town less than 4km from St. Ives.  The hotel was called The White Hart and it was very nice and included a very elaborate breakfast.  Though my favorite part was the bar which proclaimed to be the oldest in the city.  The regulars were hilarious despite me only understanding roughly 50% of what they said and it was a great spot to pregame.

The bus from the hotel to St. Ives was under 2 pounds and only took about 10 minutes as well.  I would like to definitely return sometime to visit the whole area again, but alas I had other plans for this trip.

We got into St. Ives pretty early in order to check out the town before it got really busy and to get some fish and chips.  The town is very beautiful and is a pretty cliche English countryside town in all the best ways. 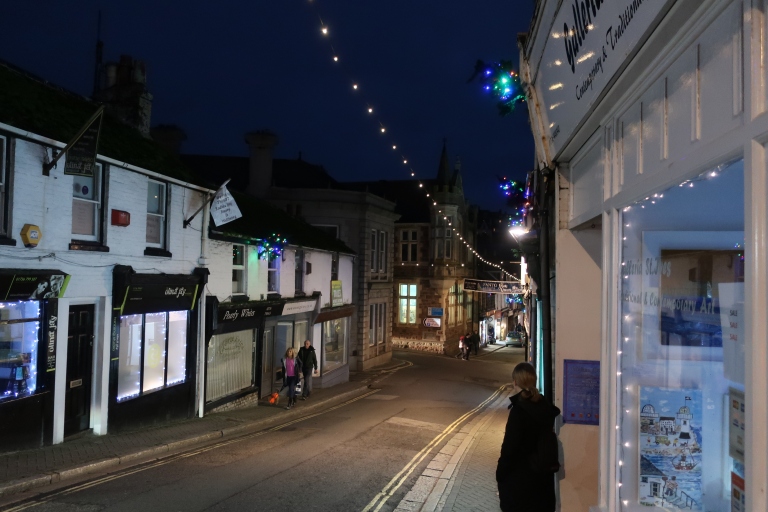 Once I had eaten roughly my body weight in fish and chips people had started to crowd around the waterfront.  Now, one thing worth mentioning is that this whole event is not “official” meaning the city itself doesn’t sponsor it or anything like that.  At some point the townspeople decided to start dressing up and partying and it just caught on.  That doesn’t have a ton of relevance but it is a fact I do like.

Now this whole event seemed to be for all demographics.  I mean the entire night at any point you could find friendly drunks and/or full families with small children just all mingling smoothly and no discernible issues.  We definitely stood out by not having any costumes as well and locals would come up to us have a friend chat, cheers their drinks and meander away.  It was a fabulous, friendly vibe.

Bathrooms were an issue in that no matter where they were you would likely be waiting in a line, but it didn’t seem to be a huge issue except for right after the fireworks.  Oh right there was also a firework show that was quite lovely.

However, despite the crowds it wasn’t hard to find a good spot for the fireworks or really get a drink at any point.  It is among my favorite New Year experiences and I would absolutely love to go back with some friends.

Now our troubles only started when it came to the end of the night.  Apparently in this area of the U.K. there are no ride share options and you have to reserve a cab as the buses do not run at 3am.  We had not reserved a cab nor did we have a phone to call one.  We began to walk outside of St. Ives under the assertion that maybe we could snag a cab away from the crowd or at least begin the long walk back.  For some reason the drive took ten minutes but the walk was projected at 2 hours.  Eventually once we got a little outside the city we found a hotel with a still partially open bar,  The bartender was nice enough to let me use a phone and call a cab which had a roughly 2 hour wait time.  This seems unfortunate however, as it turns out, the bartender was at the party earlier and I had a few pictures of him and his wife dressed as Pikachu and a giant squirrel.

So because of this we received free beers for sending him the photos, it was actually a lovely wind down to the night and with our jet lag it barely phased us.  Sometimes experiences that seem terrible end up working out pretty well, and plus we were both solidly drunk at that point anyway.  We ended up paying it forward anyway by giving a stranded girl a ride home in our cab too as she was staying close to our hotel.  Her story sounded insane and reminds me that teenagers are weird.  If I could do the story justice I would tell it but alas, I cannot.   Anyway, I forgot what I was talking about…so…the end…