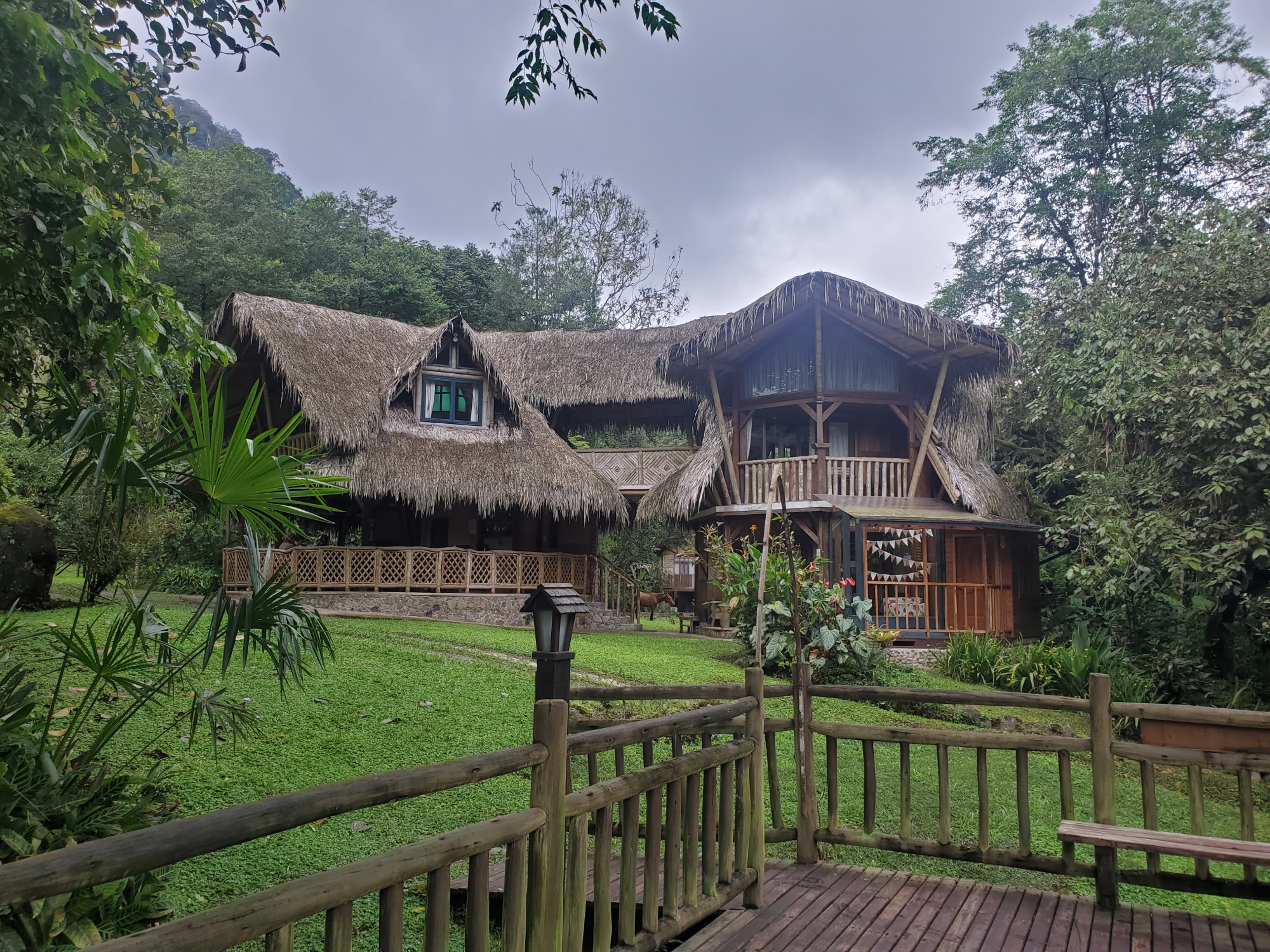 So today I want to write about my experience at what will be one of my most memorable hotels, right up there with the monkey lodge in Japan or the Salo Castle Motel in Taiwan.

The Sacha Urco Lodge in Mindo Cloud Forest, Ecuador was an incredibly remote and relaxing stay that really feels like a beginners guide to getting into a rainforest. Once you arrive in Mindo which is roughly a 2 hour drive from Quito into the forest and hills, it is another 20 minutes by cab from there, so you know this is pretty out there.

The lodge itself has a main building that features the bar/kitchen that is half outside and above it is two rooms, we stayed in the one directly above the bar. It’s like they knew I was coming. This room also offered a patio view of the bird feeding area where they would put out fruits during the day and a large variety of bird would come by for a taste. We spent an extraordinary amount of time just watching birds. I have a video of a toucan stealing a whole banana I need to get posted and I will.

With this reservation they also offer breakfast lunch and dinner homecooked right on the covered patio which I can’t suggest enough. The host was lovely and she was very accommodating. Since we were up early she even let us set up and feed the hummingbirds.

We went out to Mindo with the intention of going in to town everyday and launching activities from there. We ended up going into town once, being mostly unimpressed as our hotel offered everything already even better, then mostly staying there and bird watching/hiking from the lodge. Though in Mindo’s defense they were having problems with their one functioning ATM in the city so nobody could get money to go out.

That does bring me to the one downside I had at the lodge which I’d rather get out of the way early because, in the end, it mostly just enhanced the experience. We went during the rainy season and while the rain only seemed bad during the one day we planned to just lounge around but the power was knocked out for probably 36 hours. You still get food and drink service during this time and during the day it is a non issue as you are out and about.

However, at night, with no lights, it gets quite dark and there are quite a lot of bugs. Obviously the rooms and beds have protectors for this but when you want to sit outside and have a drink on the patio bar but it is pitch black out there can be some problems. Though I must stress this wasn’t a big deal and in the end kind of added to the experience. This does remind me they do offer a night hike to look at bugs and frogs which is not for the faint of heart.

We also booked a bird watching tour through the lodge that we left for at roughly 4am. We took some scenic side paths and saw maybe 20 or so different kinds of birds, which was lovely but I think it was worth it just to see dawn in Mindo especially by the river that the lodge sits right next to. In total that only cost $70 USD for two people so it felt very worth it.

Our total stay at the hotel for 3 night with breakfast and dinner and a fair amount of drinks was only about $600 USD which felt well worth it.

There’s also an assortment of hiking paths and horse riding available directly from the lodge. As I said we only left the lodge or did an activity not through them once to go on a waterfall hike one day which, honestly, was less fun than just hiking the paths near the hotel.

Overall, I put this on a list of must visit hotels in Ecuador. I will remember it fondly.