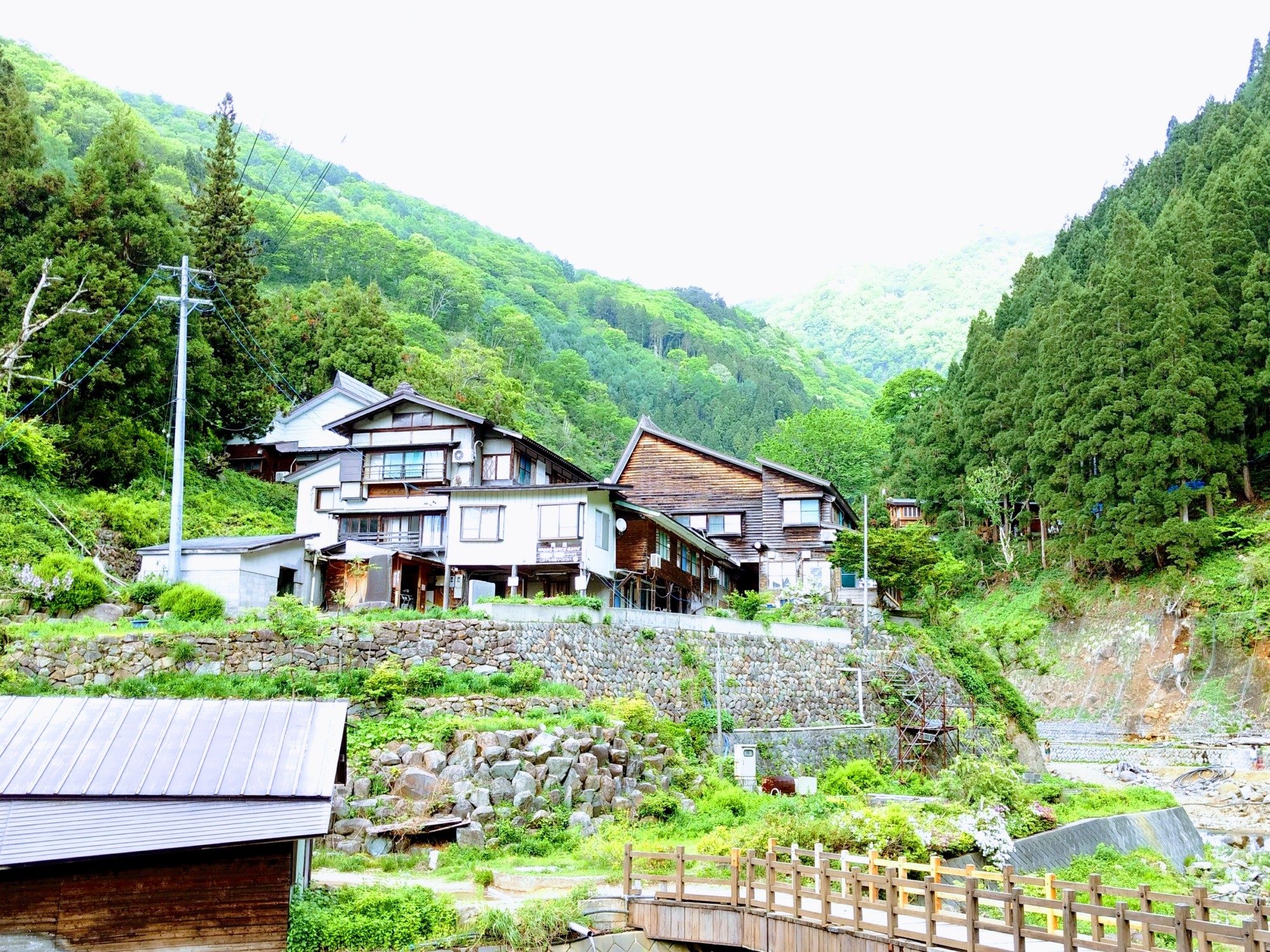 In my most recent trip to Japan I managed to stay in the amazing Jigokudani Korakukan next to the monkey park of the same name.  During the winter the hotel is typically very full due to its proximity to the slopes of Nagano but we were there during the off season just to see some monkeys.

The experience was one I had no expectations for.  I booked the place because it seemed to be the only place within very close distance to the monkey park which was the main purpose of the trip in the first place.  In order to get to the location it involved one bullet train to Nagano, one private train to Yudanaka, a bus ride up a hill then a 30 minute hike to the actual location.

Turns out the hike can be skipped for a taxi that we found out about later but where’s the fun in that.  We ended up talking with a Dutch couple in the monkey park who mentioned most people that come out to this place do so with a tour group because it can require a lot of hand holding.  I don’t suggest this, figuring it out is very simple and even getting a little confused in Japan is part of the experience anyway.

Anyway, after the bus ride we go to the pre-entrance entrance to the monkey part which is basically a 30 minute saunter through the woods to the hotel and the park.  The hike is absolutely gorgeous with some very thick woods so I recommend making the trek instead of taking the taxi past it at least once.

Once we made it through the wilderness (haha Madonna reference) we got within view of our hotel and a monkey tried to jump onto my friend.  This is where we learned to not make eye contact or back away as it is agitating to them.  Apparently this is especially true of the males that wander the area around the park when it is not mating season.  After he dusted himself off and we high fived for not getting out eyes ripped out (monkeys do that right?) we finally arrived.

During the off season Korakukan is run only by one man and his mother.  This place has been in the family for I believe 8 generations.  We checked in and were shown to our rooms.

The rooms all had a snack made by his mother of sticky rice with sweet powder, which was delicious.  They were very traditional as you can see and also came with kimonos to wear around (!) for whatever reason you’d like.

Seriously, when I say they were everywhere I mean it.  You open the window, bam, monkeys.  Walk to breakfast, monkeys.  Trying to poop in private, oh look whose there too!  Now don’t let this sound like a bad thing, it was awesome.

I decided to walk the grounds a bit and see what the whole setup looked like and I wanted to check out the natural geyser on the grounds that was shooting up 24/7 and also look at the natural hot springs.  I have a hard time articulating how beautiful this hotel and surrounding areas were and I know my pictures don’t do it justice so you will just have to believe me when I say it felt a lot like being in a surreal dream(even the pantless parts, only way to wear a kimono is commando as far as I’m concerned.)

Speaking of pantless I felt it was time to take a dip in the hot spring.  Now there are 2 springs on this site, one is ladies only all the time, the other is mixed and there are certain men only and women only times.  Also some people only know to do these springs nude, so prepare mentally for that however you must.  At first I was alone in my dip but I was joined eventually… 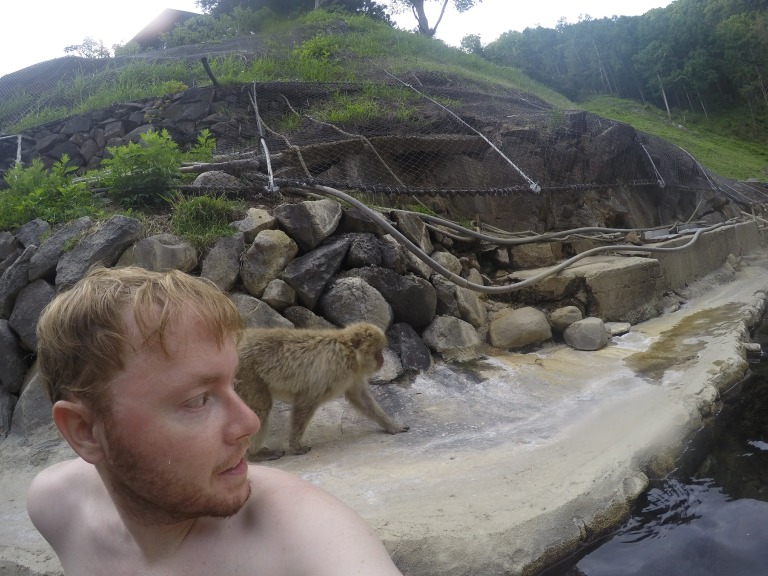 In the afternoons you will definitely have monkeys lounging around the spring and in the winter months they will likely be in it with you.  The photo opportunities there are probably enough for most people to consider the trip.  I was eventually also joined by several more people and was getting a little too much sun for my Irish skin so I went in to get ready for dinner.  Here is when I had my first experience with an onsen bath.  The water was hot, but boy did I wake the fuck up.

Korakukan provides both breakfast and dinners with a reservation cooked by them.  Lunch is also an option to add in but in the off season the food is limited.  The dinner was a mixture of hot pot style, sashimi, fish, and rice with eggs.  It was phenomenal. 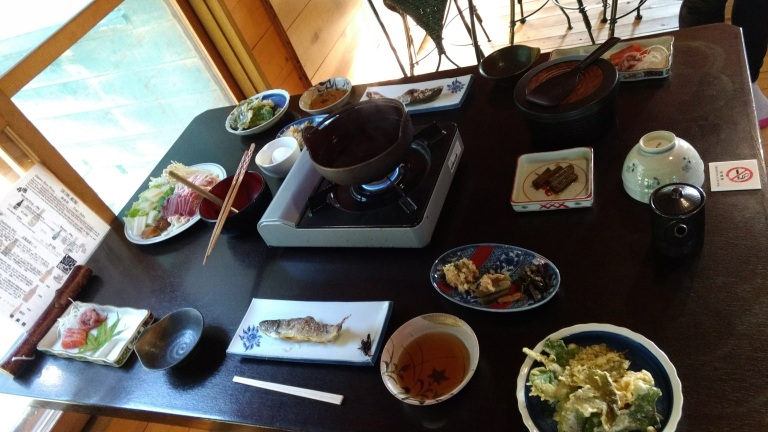 But at least I can say I did it.  It should be noted the snake wine isn’t a common thing or on the menu, the inn owner just saw me looking at the jug and asked if I wanted to try it.  For how remote the Korakukan is you can also buy beer and sake on the location if snake wine isn’t your jam.

After dinner we hit the hot springs again where the geyser is even cooler looking at night. Then we considered using their ping pong room but opted to have a night cap in our rooms instead.  We were incredibly relaxed until a series of smallish earthquakes hit.  It is a pretty reactive area after all but we were comforted to know this building has been standing since the 1800s so it would take a pretty big one to knock it out.  My friend who was staying in the town said it felt like the entire city jumped up and down for a second.

The next day we woke up for breakfast and were treated to a parade of monkeys walking through the compound for the morning feeding in the park.

This went on for a solid 30-45 minutes and was really entertaining.  I also decided to hit the hot springs again in the morning and again got a few visitors to join me.

After breakfast we headed into the actual monkey park.  So I should say after the stay in Korakukan the park itself is pretty small and ultimately not on the same level as seeing the monkeys outside your room or sharing a hot spring but it is still pretty neat. 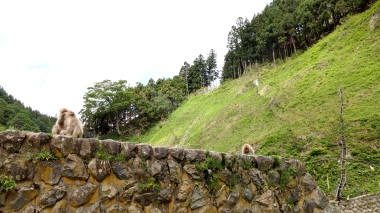 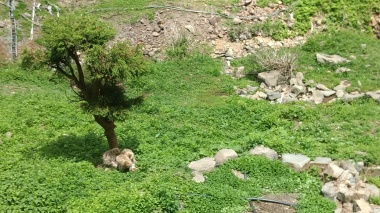 After the park we were pretty monkey’d out and decided to make the journey back to Tokyo.  Along the path back there was one final monkey.  I like to imagine it was the same one that jumped on my friend at the start just to bookend the trip really well.

I can only imagine what it is like staying at Korakukan in the wintertime and how crazy it can become but I absolutely recommend this as an experience for anyone in Japan no matter the season.

2 thoughts on “The Monkey Lifestyle of Jigokudani Onsen Korakukan”