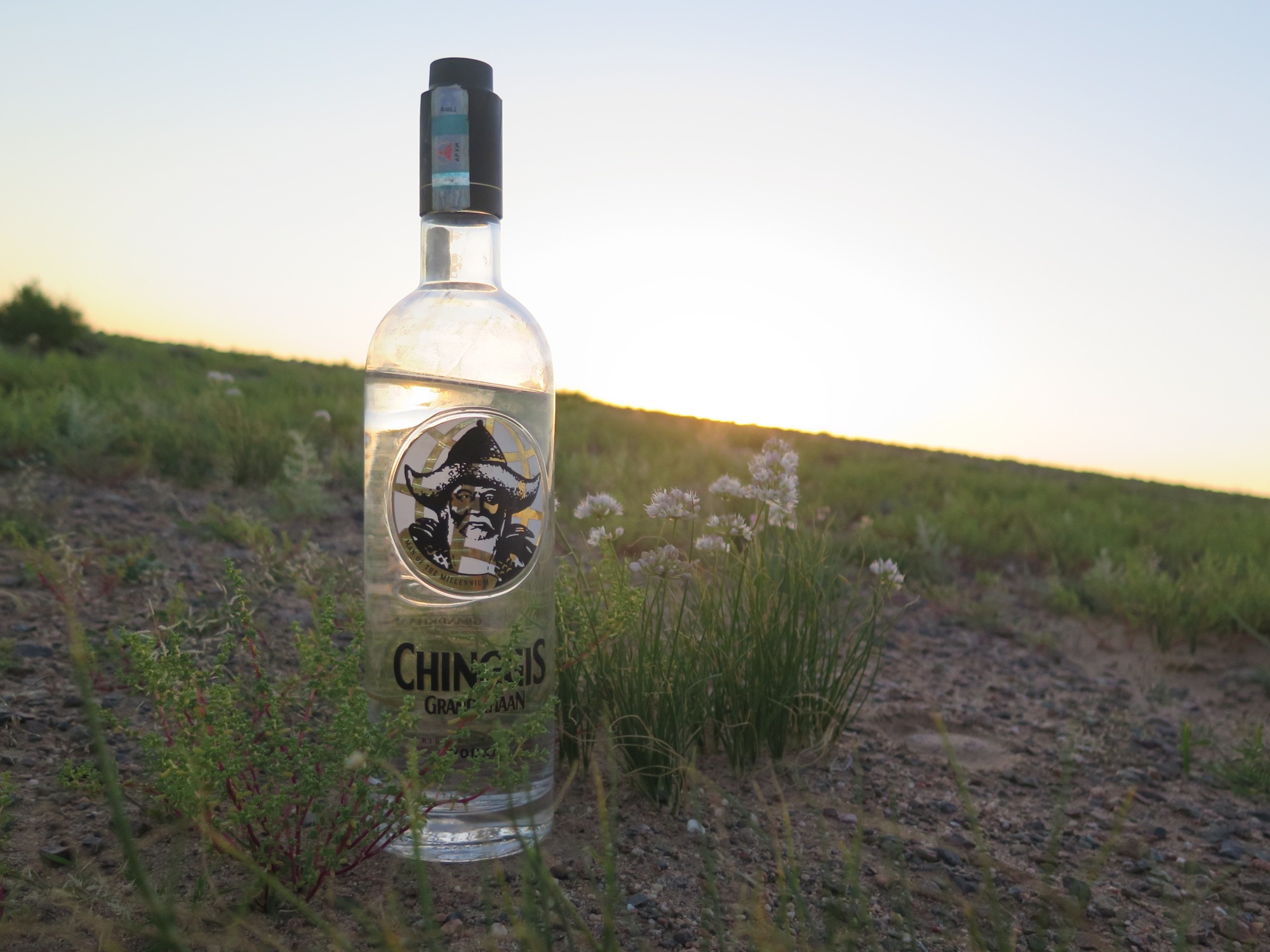 One of the key aspects of completing the Mongol Rally is the ability to handle strange breakdowns in foreign places.  For this reason I felt like going into more details on a story briefly mentioned in my previous write up on the Mongol Rally here.

When we first crossed into Mongolia our spirits were high, we had already made it farther than we had thought was even possible and we had a 2nd team caravaning along with us, the Tin Khans.   Our trusty Skoda had only had one minor hiccup in Prague but was otherwise no worse off besides the suspension being a bit bumpy.

For this reason we decided to make a stop in Ulgii, Mongolia to have our car checked out and the suspension replaced if possible as the remainder of the roads are…not ideal.  When driving through the town we found a mechanic that was meant to be…or so we thought…

Anyway Jakob has a talk with the mechanic as well as possible and he offers a tune up and to “fix” our suspension.  I do find the giant pile of suspensions sitting in the corner of their garage a bit suspicious but I don’t know enough about the topic to really disagree.  While they begin the work we hang out with some locals and play soccer, hang out with some of their local pups, and meet with another American team there to get some work done too.  Additionally, the Tin Khans also decided to get some work done on their sump guard which had taken more than a few solid hits at this point.

I wandered the town too, found the only WiFi available, drank some strange milky liquor and overall I would call it a pretty solid afternoon.  Around 4pm the mechanic had finished and was ready for us to go.  We drove the car around a bit to test it and it seemed fine to us and we packed up and headed out.

We drove roughly 100km, past another small village before the roads turned to dirt and and cell service had disappeared.  We weren’t worried though with our new, trusty suspension in place.  The “road” diverged into 3 different paths and we just picked one because the roads in Mongolia tend to diverge and reconnect later on anyway.  However no longer than 10km in the bumps became extraordinarily rough and loud.  Even more so than before we fixed the suspension.  Hana and I make eye contact in the backseat as we get the brunt of the uncomfortable feelings.  Both of the teams pull over to assess the damage. 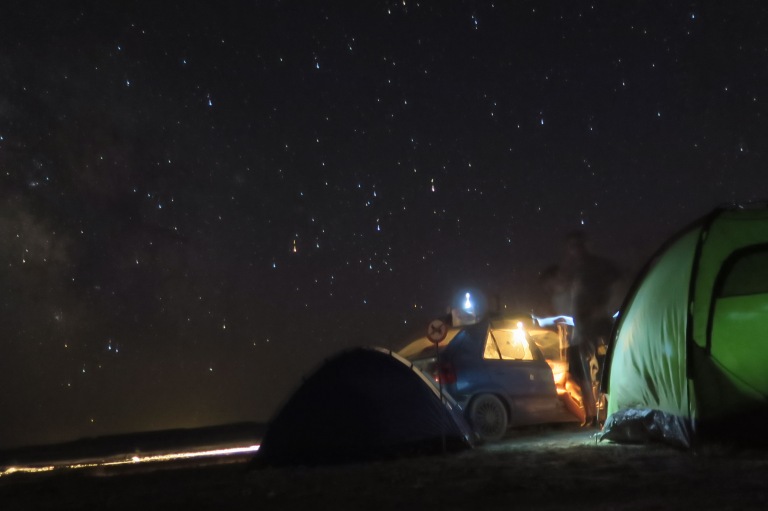 At least one of our rear shocks is completely dislodge and the car is riding way way too low.  The mechanics either didn’t replace the shock with another the proper size or just installed this one wrong, either was pretty possible.  It was starting to get dark and our options were limited to continuing forward very slowly, going back for help which involves driving at night in the dessert, or having a drunken party.  We opted for the last two.  It was decided two of us would return in Tin Khan’s car to where we had phone service and call the mechanic as Jakob got his number because he wanted to buy the car from us when the rally was over(yea, sure).  Now it would have made sense for Jakob to be the one to go back because he could roughly communicate,  however there were some tainted stomach issues coming up due to some bad water…so I got the honors of riding back with Conor in the Tin Khan Micra.  There are very few pictures at this point due to not really thinking about it honestly

At this point the two of us had made it back to the pavement but it was pitch black out now.  Roads in Mongolia don’t have any lights but what they do have is camels, just wandering everywhere with no visual warning until they are right in front of you.  Of the few rules in the Mongol Rally driving at night is one that they very much encourage you to follow.  Additionally, we only recently found out another team was in a Mongolian hospital for running into a camel at night and they can’t leave for proper medical care until somebody pays the camel owner for his loss.  Yes, it is a bit insane.

So here we are driving and looking for cell service in pitch black doing are best to avoid road camels when a rock jumps up and makes a mighty bang on the Tin Khans recently repaired sump guard, I nearly pooped myself.  We pull over to assess the damage and it turns out the mechanics had actually cut a hole in their sump guard in order to look at their gear box, thereby completely defeating the purpose of having a sump guard.  Also yes, we know we should have checked that before leaving.  However we have no choice but to continue on knowing any rock or camel will leave us additionally stranded with a campsite of other drunk stranded people 50km away down a road we may not be able to find again in the dark.

The drive was tense and full of some awkward jokes but we made it back to the small village we passed earlier and were getting some small semblance of cell service.  We pull into the town center a lo and behold, the American team we met at the same mechanic is also stranded.  I’m sure you can guess but their predicament is tied to the very work the mechanic had done to their car earlier as well.  At this point, a gathering of people in the village had flocked around to gawk and offer help.  Though the only action I saw take place was them hitting the car with a hammer, which likely didn’t help.

Anyway, we called the mechanic, who then had to pass the phone around to a few different other relatives to roughly get the translation.  He was reluctant but when we mentioned we would tell other rally teams about his service he said he would visit the stranded American team, then come find us in the middle of the desert and help us out.  We had to leave a fire though so he could find us, which I found hilarious.  We stuck around with the American team until a van showed up from the mechanic to help them then we set off back to find our campsite.

The drive back is very similar to the drive there except we have lost a little bit more of our sanity, which is actually really good on this trip.  Fortunately as well the campsite has taken a liberty of already creating a fire and drinking.  I tell them the good news that I’m pretty sure the mechanic will come help us tonight and we just need to sit tight.  I’m not completely confident in this though based on the very unclear communication.

I eat some soup heated by more tainted water which will come back to haunt me the next day, and I have some vodka to take the sting of the nights events off.  By about 2am there is no mechanic and I have fallen asleep.

I am awoken maybe an hour later to the sound of vehicles, which is a novelty in itself on these roads.  I exit my tent and see the other American team with the mechanic van who is immediately working on our car.  A tiny bit of hope has been restored.  When they finish Jakob briefly tests it to confirm it is not going to collapse again(he is still not feeling so hot right now) while I run to the bushes to deal with a stomach issue from the tainted soup of earlier.  We give them some gas for their troubles which we wouldn’t have been in without their skills in the first place, but whatever at least they corrected it.

Our suspension was never good after that, but it also wasn’t collapsed and we could continue at an alright pace.  Jakob spent the day in the backseat sleeping while Hana and I alternated driving after I voided everything in my system in the very few bushes around the camp.  This was only the start of Mongolia, have a look at an overview of the whole adventure in the 3 part write up I did here.  I’ll also likely go into more detail on some of the other stories later on as well.

One thought on “Dealing With Mechanics in Mongolia”