Well I did finally make it to Shanghai and it is basically how I remember China from years past.  The internet is either a pain or slow(which makes these updates a bit difficult) and there’s a definite culture adjustment.  That said, this place is way friendlier than I am used to from the past and everyone is incredibly nice.  Also only one person has whipped out his piece and peed in full view which is a  big plus as well. Occasionally someone also tries to sneak a photo of me but that’s no problem, I’d even pose if they would ask.   Anyway, tonight I attempted to find the Shanghai Brewery but when I got to the location it was either closed or never there, I blame MAPS.ME, even though that app has been a lifesaver I shouldn’t trust it completely without double checking another map.  Also it was raining. 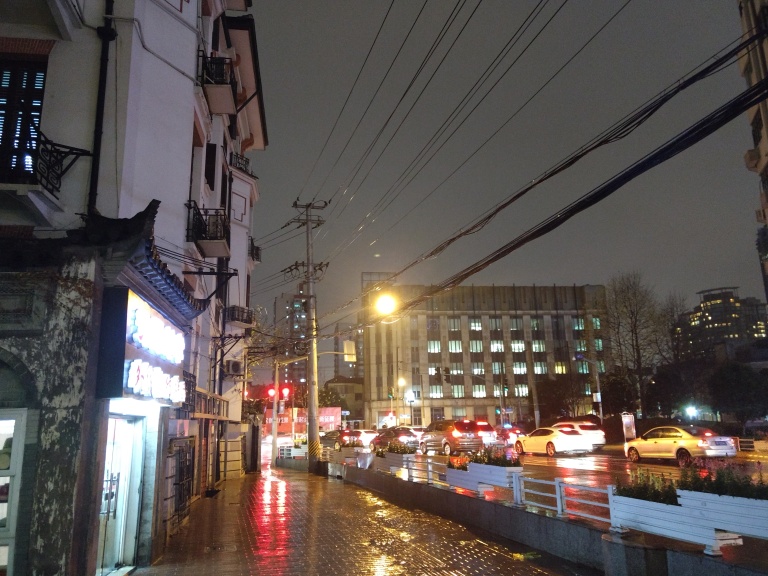 I found the nearest bar I could which was called Oscar’s Pub.  I needed to kill a couple hours before going to a hot pot restaurant which ended up amazing and I’ll write about later on.  But anyway, as with anything with the word Pub in it in a foreign country this place seemed full of expats. That’s not a bad thing obviously but the prices did match that as well it was a bit most costly than I’m used to in China.

Even so with the prices, they had 2 perks that I didn’t know I loved until I experienced them.

1. They lit all their shots on fire.

After waiting we decided to try some shots and to our surprise the bartender comes and lights them up for us. Great! I love a good presentation! Then they did it again for the 2nd and 3rd rounds…the alcoholic pyro I never knew I had inside me was very pleased…

2. The bathroom offers a street view whilst you pee.

I mean look at that view, how could you not like that stiff open breeze when relieving yourself?  It’s like urinating from atop a Swiss mountain minus the fact the air smells like foot pollution.

It also creates some funny picture potential and is awkward if someone on street level makes eye contact or tries to wave at you and you can’t wave back so they think you’re rude.  I’m clearly overthinking this because it’s 4am and I’m wide awake writing this.  Jetlag is a killer, people.  Overall, this trip has been looking up.  I’m heading into Chengdu today and I do have a few crazy and ridiculous things to go over that will get their own posts soon…once I get my VPN to actually work…