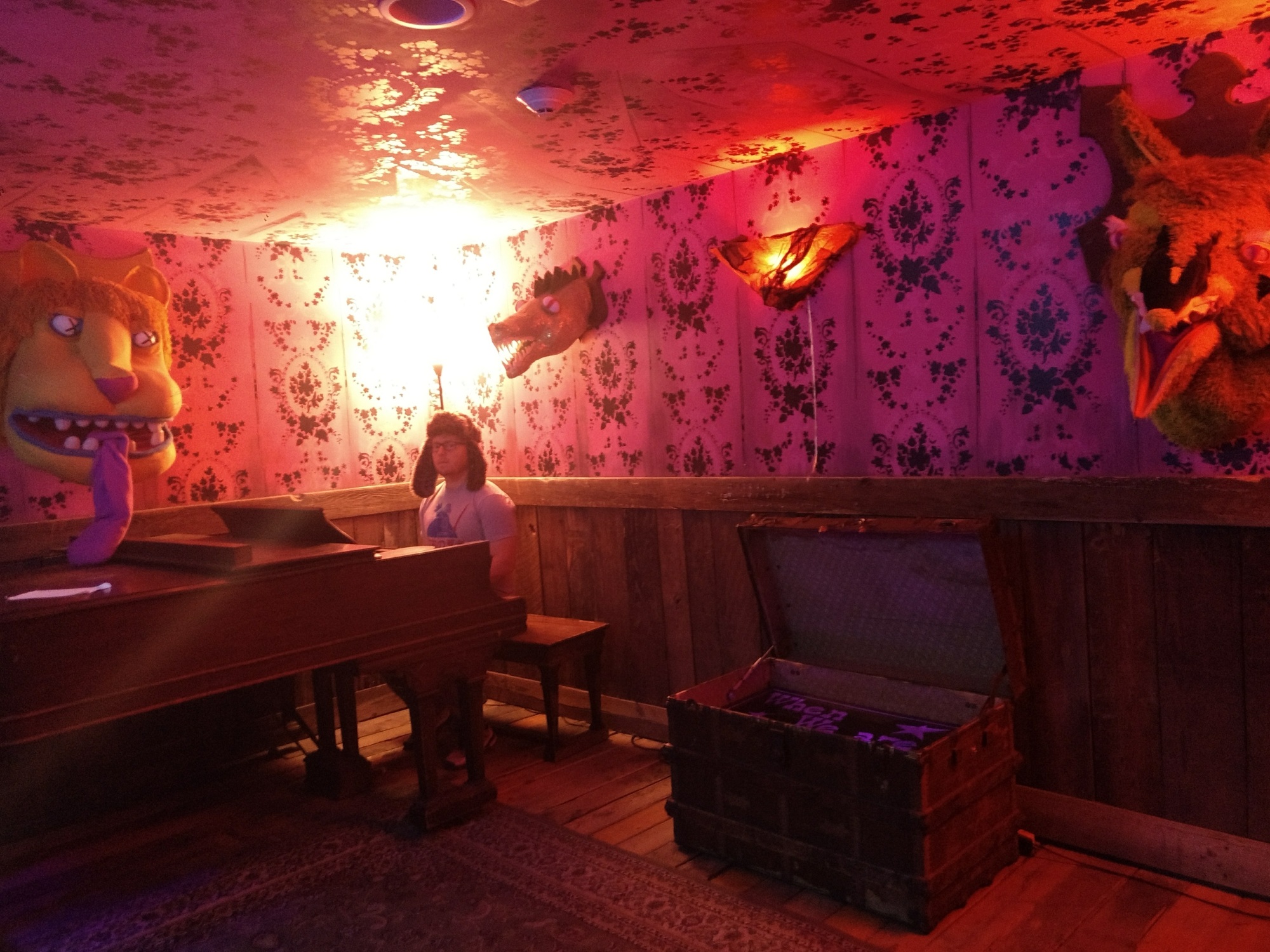 Over the last year I kept hearing about the fabulously weird place called Meow Wolf so much that I decided to go on a road trip to find out what the big deal was.  We made a couple other stops on the way that were worth their own writeups here and here.

Let me say this first, I loved this place.  The exhibit we saw called House of Eternal Run was hands down the best modern art/exhibit/mystery story I’ve ever seen and I’ll get into that explanation in a second.  First, Meow Wolf itself is a modern art museum(with a bar!) that operates out of an old bowling alley in Santa Fe, New Mexico.  Tickets inside are 20 USD per person and include unlimited re-entry for the entire day with food trucks outside to keep your energy up.

If you want a mostly spoiler free video of this place I made a short one here with a tiny fraction of what this place offers.

Now, onto the exhibit itself.  From here on out I’m going to write about the narrative/mystery story of the exhibit so if you want to go into this spoiler free sometime I suggest stepping a way now.

The basic premise of this exhibit’s story is a family that has been researching other dimensions have opened a portal and caused an event that combined their home with the mentioned alternate reality.  You may read things about this place and it’s random aesthetic and trippy presentation, which is fine, but I feel a lot of those are from the people that didn’t bother looking into the plot of the exhibit.  Every room has a purpose and is tied back to this story arc.  We were in this place for roughly 6 hours and I can say I think we have a decent grasp of the plot.

It starts with the grandfather Emerson Selig who is researching sonic energy and performs experiments in his home.  He even resurrects a guinea pig.  You discover a lot of this information from logs in the houses study.  One of these experiments goes awry and impacts Emerson’s son Lucius.  Lucius gains abilities to affect people and uses them to essentially start a cult as an adult and generally be a not-so-ideal human being.  Eventually his 2nd in command of this cult betrays him and takes the followers from him and leaves.  You find this information in motivational videos and a letter mostly in the main lounge room of the house. There’s also audio/video logs throughout the alternate dimension that mention this.

This is a good time to mention there is a secret agency that is devoted to keeping order and prevent the “chaos” from getting out of control and individuals like Lucius represent said chaos.  This group essentially goes beyond standard government agency and broaches the cosmic entity aspect of the plot.  There are video logs scattered in the alternate reality of alien beings, one for order and one for chaos making a pact to help each other navigate and build the universe.  These beings are tied to an agency that then take Lucius and remove his abilities surgically.

In the meantime, back in the Selig household there is Jean Selig, wife of Emerson along with their daughter Piper, her husband Nicolae, and their two twin children Lex and Morgan.  There are two events that happen and I wasn’t sure on their order and whether one caused the other but from my best guess through reading logs on Nicolaes site ihearmusicfromouterspace.com (super spoilers on that site, you find it by decoding a puzzle in Nicolae’s bedroom) suggests that Jean encouraged everyone to practice their abilities and get better with them.  Nicole and Lex have begun researching and experiments and have even visited the alternate realities with special equipment.  However when Jean died this affected Lex greatly and he began researching ways to guarantee bonds and consciousness were never lost in death.  It is unclear whether his motives are to bring back his grandmother or preserve the bond with his sister but either way, Lex becomes the central figure in the narrative.  Also worth noting just because I didn’t find story aspects doesn’t mean they weren’t there.  There was a deluge of information to sort through and the effort to build this universe was clearly astounding.  Don’t let my brief summaries detract from the fact that incredible details go into long and elaborate stories, videos, and logs.

After Lucius’ betrayal he moves back to the Selig house and notices Lex’s abilities and tests.  The two of them begin experiments together where Lucius hopes to get his abilities back and Lex to transcend his wordly bonds.  One of these experiments goes wrong in a video log you see in the ribcage music room(yes that’s correct) and Lex becomes sick.  Over the next 2 weeks Lex phases out of the human dimension and is considered dead.  His family, primarily Nicolae and Piper, can’t handle this and continue working to bring him back.  They create portals and move between dimensions searching for Lex.  A lot of these are detailed in logs and videos hidden all over.

From here the narrative to me became a bit jumbled, possibly by design as we are not dealing with linear time anymore.  You find out how Lucius was picking and choosing dimensional parts he liked and creating a personal reality, there’s very crucial audio logs of when Nicolae possibly finds Lex in the other dimension and describes how he has grown “too big” for just one reality.  Jean also has an audio log describing her family as the chaos and typing it to the cosmic narrative that overshadows the family drama.  Honestly, if anyone has closure on the family narrative I would love to hear it as it was all a bit subjective or I just couldn’t find all the clues.

I do know there is a critical audio clip in the disco animal room(again, yes, that’s correct and awesome) where you have to press all the buttons in a certain order to hear.  We did this but the room was crowded and I could not completely discern it but I believe it was Lucius speaking in an almost Nazi like manner which leads me to believe he got his abilities back.  I could also be way off base as between the music and people I heard maybe 10 percent of the clip and couldn’t get it to repeat.

Again, this summary only briefly covers some key points of the narrative and all the rooms in the exhibit are tied to it.  You notice the connections as you uncover the story, there is a method to the madness.  Books in Lex’s room tied to a strange eye dome, sketches to weird animals,  everything is connected.

OK, so this post has gone on long enough I think and it gives an idea of the scale of story you are dealing with.  Everyone should experience this place to whatever level of involvement you want because you will recognize the level of creativity it takes to build this astounding place.  Here’s another video of a walk-through from the house entrance through the refrigerator portal.

Here’s a few more pics of the place. 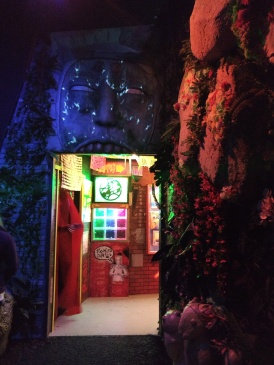 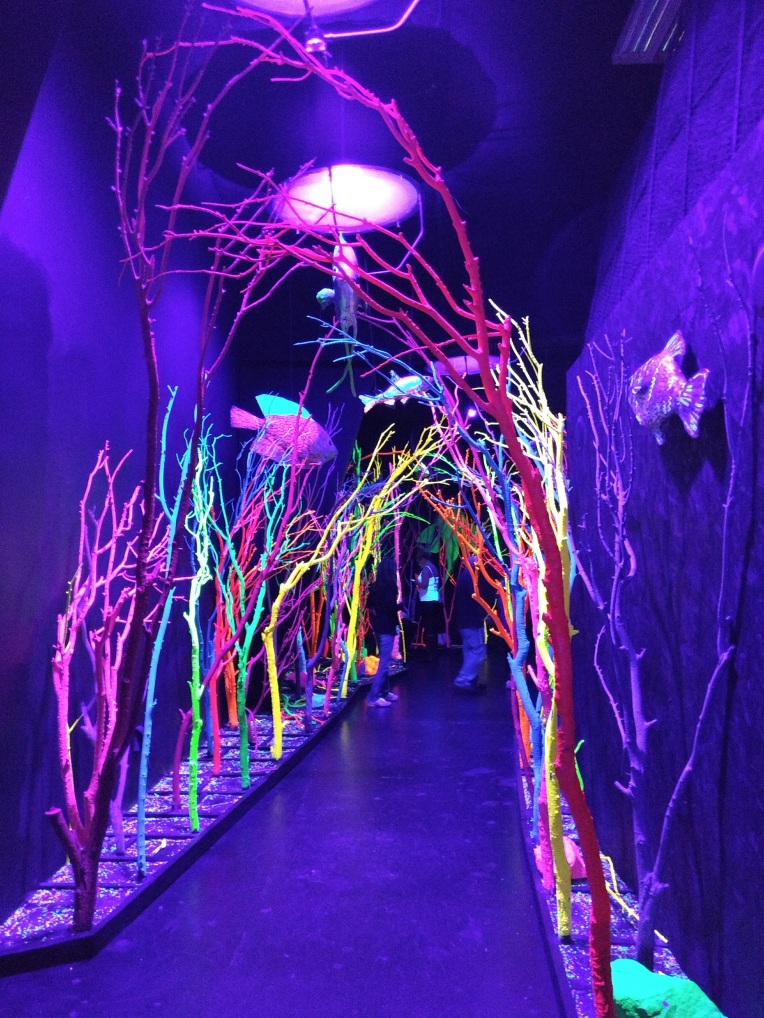 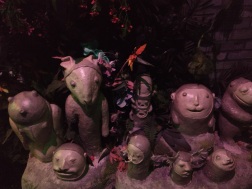 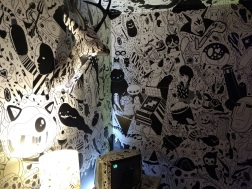 This is their bathroom…

2 thoughts on “Meow Wolf aka The Greatest Mystery Exhibit Ever”