It was time to set off on our roughly 900 kilometer journey across Morocco on these bite sized, adorable bikes.  What could go wrong? 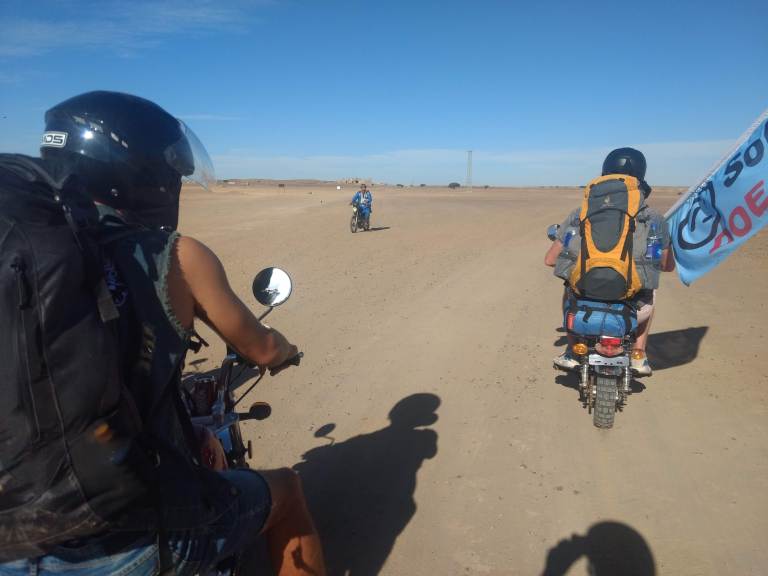 The starting line was a mixture of energy and hungover madness.  It was glorious.  When everyone set off it was a good 20 minutes of a giant caravan.

Eventually people broke off onto their respective routes.  As we didn’t have one we pretty much just picked a direction and headed off where we stopped at a Sahara gas station to fill up before the long day.

Filling up involved one of the attendants running across the desert to the nearby station over a kilometer away, filling up water bottles, then coming back.  We tipped him well.

After that we were off.  Now, as this trip was a bit of a “Choose Your Own Adventure” sort of thing we were absolutely not going to make it easy.  We would randomly hit some side roads and do our best at offroading.

Now, after a few of these random off-chutes we were getting a little excited and cocky about out abilities.  We were so cocky, we saw a hill and though, “Gee, I bet we could get our bikes on top of that…”

So we set off… 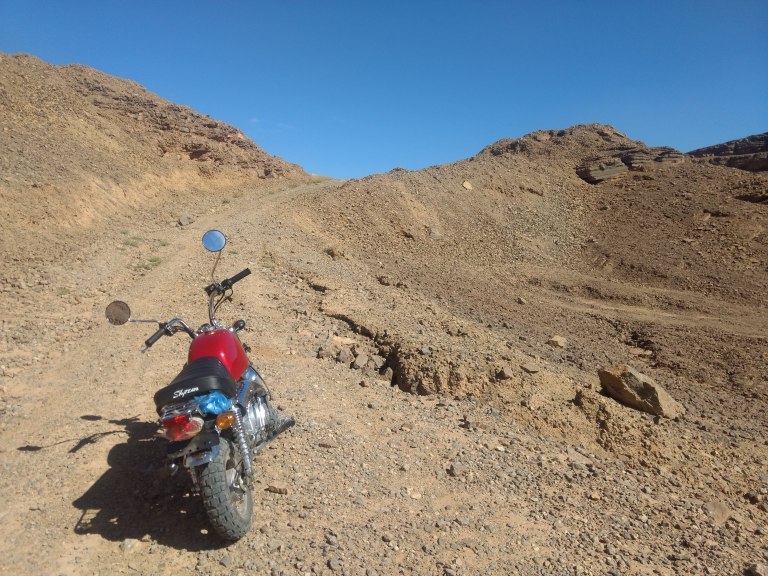 After a respectable struggle we made it to the top. 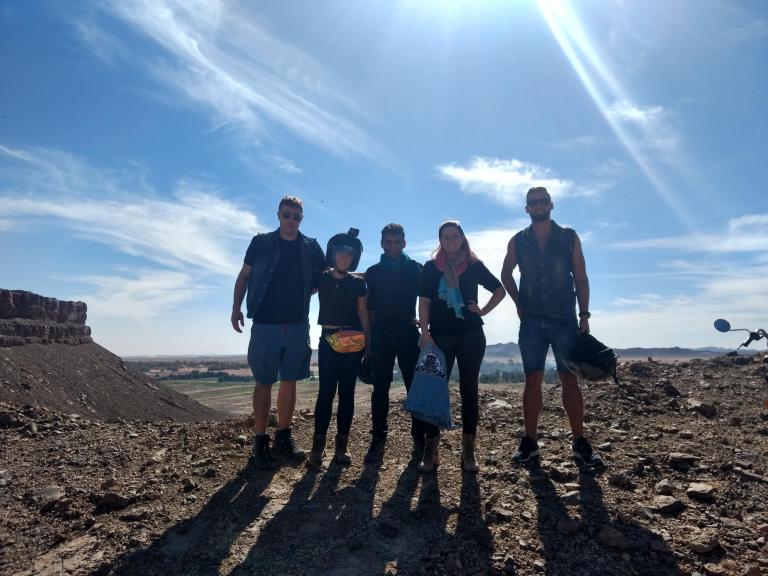 We took in the view and after a few minutes one of us who shall not be named said they did not want to go back the way we came because it was a bit steep.  So we decided to attempt to go around the back down the seemingly less steep option…I mean it had to be easier right?

It started as a solid mixture of no roads and dark/sharp black rocks that had a propensity for making our wheels slide a lot.  Additionally we very quickly got very lost.  We resorted to asking a small girl holding a baby sheep for directions.  They were the only other living things we encountered on this tryst.

After a solidly rough go at it we at the very least got to the bottom of the hill where we had a vague idea where to go.  It was at the point that the terrain changed…

Of course, with me always looking for my next fix I ventured over a nearby dirt wall to discover an even more interesting terrain to attempt.

The visuals on this dried up mud was great, and the photos were so cool.  You did have to take it a bit slow to avoid getting a wheel stuck in the crevasses though. 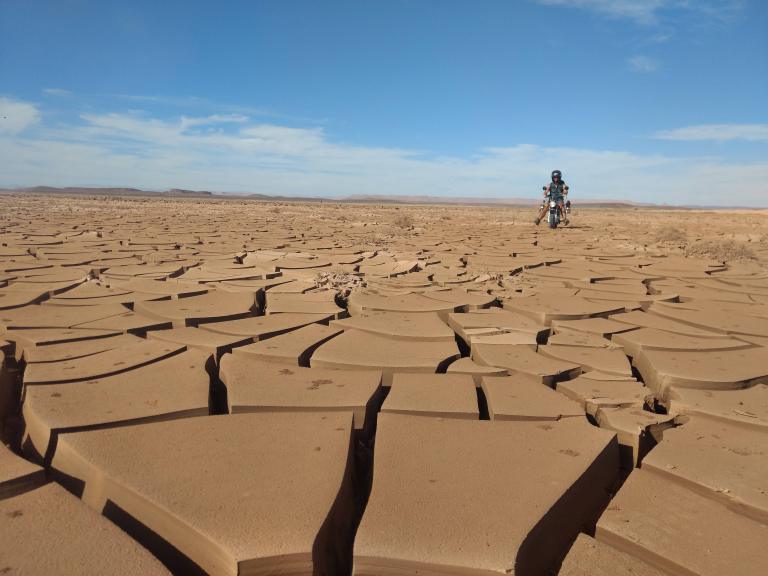 Overall things were going pretty smoothly.  We hit a few different terrains, had some crazy experiences and didn’t lose all that much time.  I mean…things really were just going so well…

Apparently the dark parts of the mud you really just sink right into the mud.  Our teammate, Shine, got a little bit ahead of us and found the wrath of this sinkhole.  It was hilarious.  When we all stopped laughing, which did take awhile, we gathered together for a glorious attempt at pulling the bike out.

No shame on my part, anything for a laugh I suppose.

Anyway, we got the bike out and it was the beginning of a long deterioration for that bike which culminated about 5 days later which I’ll talk about another time.  The bike did start though and seemed decent enough to move on, so we did.  Until another teammate, Jeremy, had his chain fall off.  Now this seems like a minor thing to many people but not to those that were ignoring and or drinking during the basic bike maintenance talk.  Which we were.  Plus we only had 1 wrench which was the culmination of all of our tools.  So to solve this we walked the bike back to the road and after a few minutes a nice Belgian couple stopped and gave us a lesson in fixing chains which we would absolutely mess up two days later and make things way worse.

At this point it was getting dark and we needed a place to stay after we covered a whopping 80km today.  Perhaps we needed to take it easy on the offroading…

So we get to the next town and apparently there are no hotels.  I had never experienced this before but we checked with multiple people using what I assume was perfectly clear hand gestures and they all ended the same way.  No Hotel.  As the sun was setting and we all had a general aversion to night driving on these bikes we decided to sit at a near cafe for some food.  If we had to keep driving at we weren’t going to possibly die on an empty stomach.  Then the weirdest and luckiest thing happened…

The cafe owner came up to us and chased off the kids touching our bikes and asked if we had anywhere to stay that night.  Of course we said no and asked how he had heard this.  Apparently he hadn’t heard anything but wanted us to come stay at his house with him where he would feed us and let us sleep and we immediately accepted his offer.

At this point we had reflected on our day and asked…did we peak too early…?  We hit a ton of Monkey Run staples within 12 hours and were about to stay at a locals house(which I will discuss in the next post).  What else could happen?  Well…apparently a lot…

4 thoughts on “Morocco Monkey Run – Did We Peak Too Early?”