So it has been a long quarantine and there isn’t really a good indication it will be lifted in 2020 to me.  There’s a couple flashes in the pan with potential trips to maybe Jamaica or Iceland but I’m not overly optimistic there.  So, this has forced me to look locally at destinations and excursions and while I have done that a bit in the past as more of a way to kill time this time I have to start looking around seriously.  Plus, with Covid you can’t be too sure on hotels even so this has literally forced me to attempt something I always told myself I wouldn’t try with any seriousness…camping…

Once I showered that shame off the question became where should we camp?  As it was 4th of July weekend and I refused to change the date because my stir crazy level was far too high we were looking last minute.  Additionally, since most fireworks shows have been cancelled due to fire a ton more people were looking to go camping as well and had booked up most campgrounds.  Fortunately, I already knew the perfect place that never gets booked up…for whatever reason.

The UFO Watchtower down in Saguache County, Colorado aka The Valley.

It is called that because that area has the highest number of UFO sightings per capita in the USA.  Additionally, 25 psychics have, apparently, visited the watchtower location and deemed it the site of an inter-dimensional alien vortex.  So that’s pretty dope.  Plus from there is it only a 30 min drive to the Sand Dunes and 5 min to the Gator Park.  So location-wise it was a good spot for us.

We packed up our camping gear(ugh) and made the 3 hour drive.  Can I just say packing for camping is way more annoying than packing for flight travel.  You have to plan for every day and night plus the gear and if you forget anything it has dire consequences.  We forgot a pump for the air mattress and boom, no sleep cause we can’t run out and grab one anywhere in the middle of nowhere.  Plus the setup and the take down.  It’s a lot of effort to build a cloth house. I can see why glamping and trailers are popular but it still seems like a lot of effort to just drink outside.  Whatever, I’m a sour puss.

So we get there, set up, forget the mattress, drink enough to sleep on hard ground, and are kept up by neighbors partying until 3am.  Normally I’m fine with that and support it but I didn’t know how much I loved soundproof walls until now.  I should mention though we did stop at Grammy’s for dinner and it was actually quite delicious, so that was a solid perk.  Plus the whole county seemed to be taking Covid restrictions seriously and I respect that.  Plus I had an alien cloth mask that fit in real well.

Anyway, the next day was busy.  We started early to visit the Sand Dunes.  You gotta go early for heat and crowds so the earlier the better.  We got there about 7am(now you see why the 3am parties were annoying) and had about 3 hours of cloud cover and smaller crowds before it got more full.  I will say, the dunes are pretty awesome. 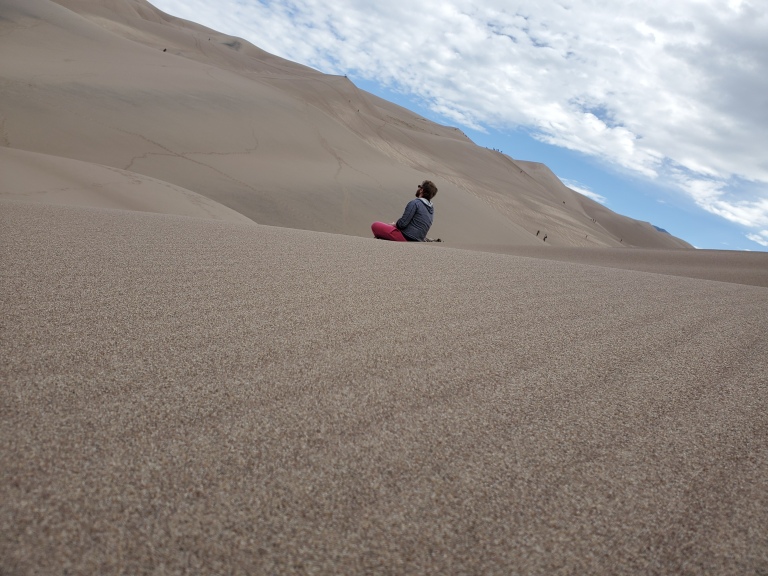 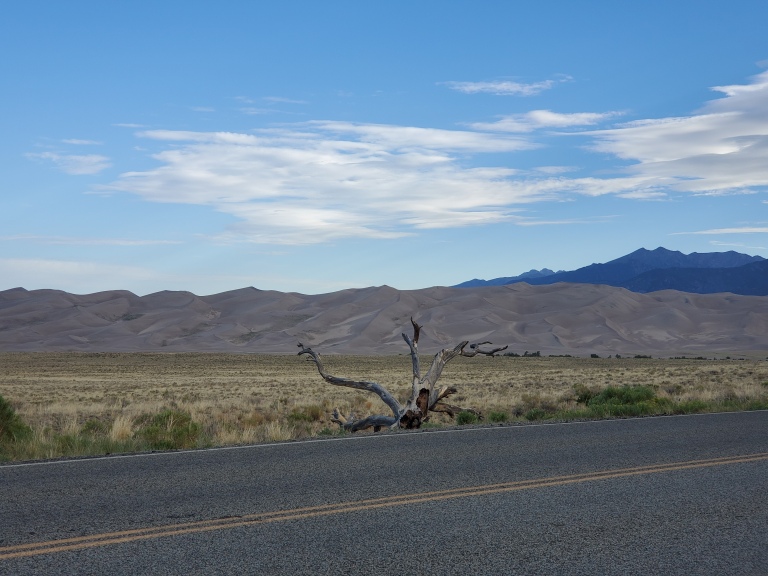 After the dunes and clearing out the sand from various orifices we decided to go to the gator park again. I have been before but you know, it is cool so I’m going again.  They seem to have expanded and are working with the grey wolf rescue and giving them some land to house wolves on until they get their new site built.  I’ve talked about it before though on internally wondering where the line is for animal exploitation.  I mean I don’t LOVE zoos but I recognize their necessity.  Additionally, with reptiles for the most part they want places to sleep and eat and that’s it.  Plus this park started when they were taking in abandoned gators from nearby fish farms.  These factors contribute to me being OK with this places existence.  Plus they seem to care greatly for the animals and are pretty knowledgeable, but that could just be my projection.  Anyway, here’s photos. 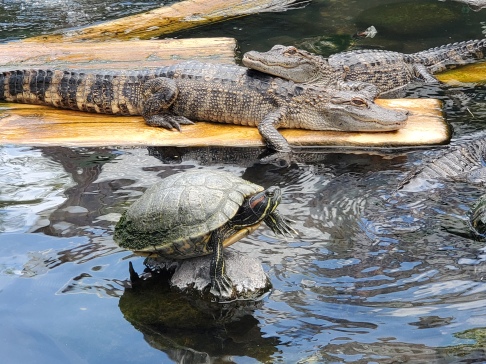 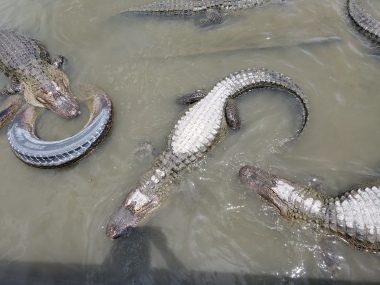 After his we had been out for roughly 8 hours and were ready for some relaxation and ready to attempt campground cooking.  Fortunately we didn’t forget the propane stove so we were able to make some chili cheese dogs for the 4th.  That, for the most part, brings us to the end of the weekend trip minus getting lost and discovering that there is dog sledding out here, which is going on the list.

Overall, I can see myself learning to tolerate camping as a tool to allow me some level of travel and I also like that it allows me to you know, not talk to so many people.

One thought on “Sand Dunes, Aliens, Gators, and…camping I guess…”